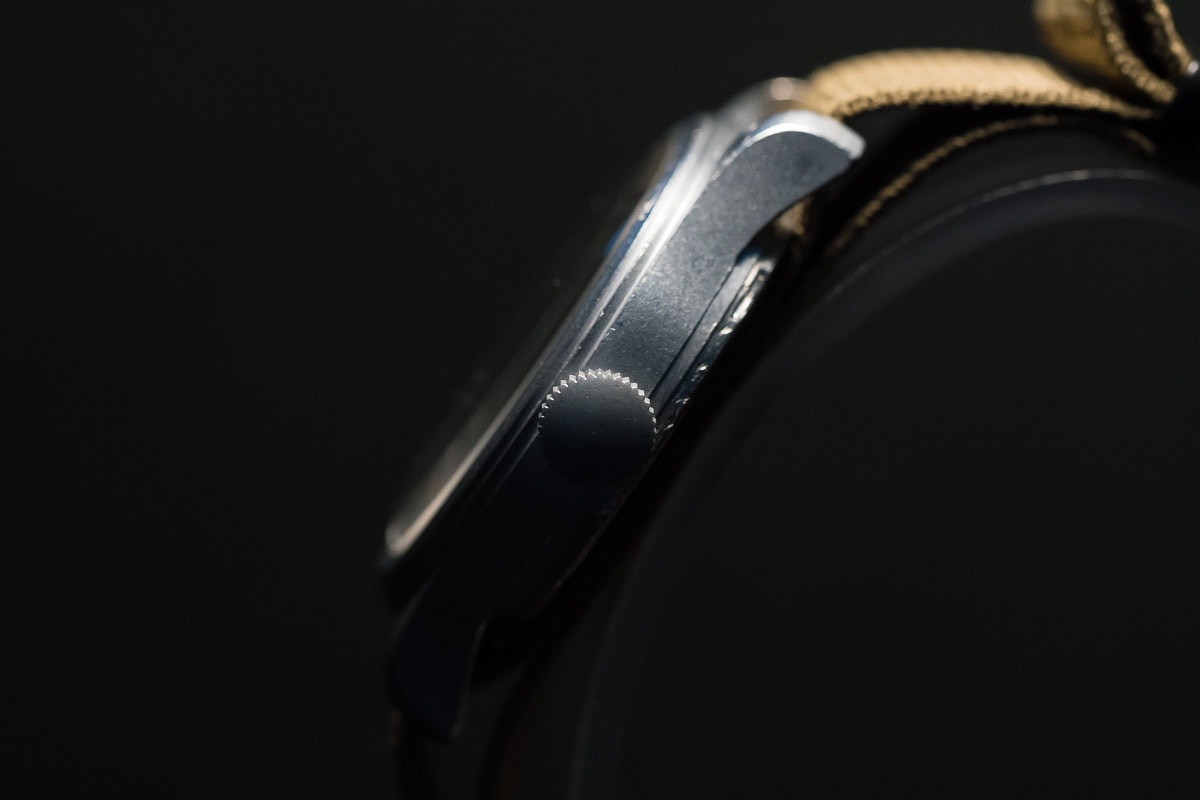 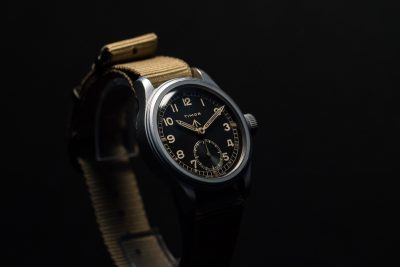 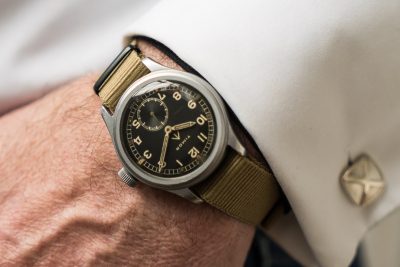 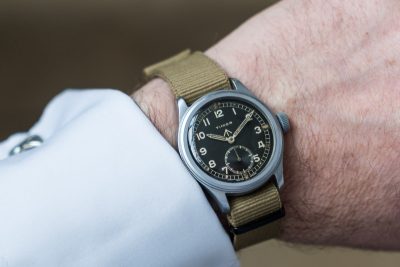 Well yes, it is, and a very good one at that; but it’s also the term somebody came up with to collectively describe the twelve different manufacturers watches made specifically for the MoD (Ministry of Defence) towards the end of WW2.

These watches were all marked WWW for “Watch Wrist Waterproof” and all had to meet very strict specifications. All the manufacturers were given the same criteria or specification – 15 jewel movement, black luminous dials with subsidiary seconds dial, shatterproof Perspex glass and a degree of waterproofing.

Our Timor is in beautiful, unrestored condition on the outside and has been fully serviced on the inside. When we bought it in Scotland, it was covered in life’s grime. It had obviously been worn for years by the same person and had a dirty waxy crud all over it. The “Dirty” in Dirty Dozen was certainly true for this timepiece! However, like a chrysalis turning into a Butterfly, with gentle cleaning this beauty appeared!

During the cleaning process, we left the face and hands, as discovered. The face and hands of a watch are its eyes and soul. They are part of its story and let’s face it, nobody likes plastic surgery! Ours despite its age, is holding up very well. The lume on the pencil hands and five-minute markers has become entrenched with dirt, which only enforces this watch’s credentials. The “Broad Arrow” is marked on the dial, inner case, and the case back.

Why a Broad Arrow?

The use of the Broad Arrow for government goods goes all the way back to Sir Philip Sidney, Joint Master of the Ordnance in 1585, whose family used the Broad Arrow in its coat of arms. That would make a great Pub-Quiz question!

The case too, is in fantastic condition and is a tribute to the original specifications set by the MOD. It’s “Ghosted” Stainless Steel finish; designed to reduce the possibility of glare and the reflection of light, is in near perfect condition. There are very minor ding marks on the lugs and bezel at 1 o’clock, but little else. The 7mm Winder and Fixed Bars are in similarly good condition.

All WWW watches have; and are easily identifiable by, further engravings to the case back. The Broad Arrow and WWW should be present, along with two more lines of engraving: a military serial number – a capital letter followed by up to five digits. This Timor is marked “K3160” and this appears above a second, standard civil serial number “33060. Timor also stamped “TIMOR” into the case too.

Timor was among the quartet of manufacturers of the Dirty Dozen, who supplied their watches with inner dust caps, along with Cyma, Grana and Eterna.

What is fascinating, when looking closely at the case back of our Timor, is there are distinct “micro scratches” across it, that run the width of the case back. These have been caused by the Strap rubbing against it for many many years. We see two directions, possibly three, that these scratches follow, suggesting the watch has only been opened a minimal number of times. Over time, a forth set of micro scratches will appear, from it’s new owner, adding to its history and its soul.

Timor, like Record, is one of those brands that simply faded away. The name Timor Watch Co. SA was registered to Bernheim & Co in La Chaux-de-Fonds; and was an assembler of cases and movements from outside suppliers. How such a small company came to be one of the Dirty Dozen is down to the number of Timor watches being exported to UK before and during the war. Their strap-line of “Trust Timor, it’s tested”, obviously struck a chord.

Timor is number eight in the WWW manufacturing “by volume” league table. The brand produced approximately 13,000 units. Due to the rigours of the environments these watches were design for, many have fallen by the wayside. Others were sent back to the REME for repair, many having both the hands and dials exchanged. This makes finding an unmolested survivor much harder to find.

It is said, that less than 20 people in the world have the complete “Dirty Dozen”, but every journey starts with one step. Is this Timor your “first step” or one of many already taken? It doesn’t matter, but the iconic status, rarity and the fact these watches define the term “Tool Watch” means every watch collector should have at least one “WWW” watch in their box!

In order to respond to your enquiry, we will process the personal data you have suppliedin accordance with our privacy policy.

This website uses cookies to improve your experience while you navigate through the website. Out of these, the cookies that are categorized as necessary are stored on your browser as they are essential for the working of basic functionalities of the website. We also use third-party cookies that help us analyze and understand how you use this website. These cookies will be stored in your browser only with your consent. You also have the option to opt-out of these cookies. But opting out of some of these cookies may affect your browsing experience.
Necessary Always Enabled
Necessary cookies are absolutely essential for the website to function properly. These cookies ensure basic functionalities and security features of the website, anonymously.
Functional
Functional cookies help to perform certain functionalities like sharing the content of the website on social media platforms, collect feedbacks, and other third-party features.
Performance
Performance cookies are used to understand and analyze the key performance indexes of the website which helps in delivering a better user experience for the visitors.
Analytics
Analytical cookies are used to understand how visitors interact with the website. These cookies help provide information on metrics the number of visitors, bounce rate, traffic source, etc.
Advertisement
Advertisement cookies are used to provide visitors with relevant ads and marketing campaigns. These cookies track visitors across websites and collect information to provide customized ads.
Others
Other uncategorized cookies are those that are being analyzed and have not been classified into a category as yet.
SAVE & ACCEPT